We remain open to provide care for your pets. We are following the direction of government and regulatory authorities and have implemented hospital and visit protocols to keep both you and our team safe. For regular updates on our hours and visit protocols, please follow our social media platforms.

Possessive Aggression in our Dogs

One form of aggression in our pets that often goes excused is possessive aggression, and it commonly manifests itself with puppies as it is passed as being ‘cute’. Possessive aggression may be directed towards humans or other pets that approach the dog when it is in possession of something that is highly desirable, such as a chew toy, food, or treat. The ‘cuteness’ quickly disappears when they are grown adults, or in the event that a person or other animal is injured. While protecting possessions is necessary if an animal is to survive and thrive in the wild, it should never be permitted with our domestic pets.

Preventing an unwanted behaviour is always much easier than treating it when it becomes problematic. It is crucial to instill good canine behaviours from the moment a pet enters your home. Teaching puppies when they are young that handling their food and ‘possessions’ such as toys results in a positive outcome will help deter possessive behaviours. Gently approaching your puppy while eating and removing the food bowl, while giving positive praise such as a calm soothing voice and gentle petting, will help create a positive experience with others handling their food. Exposing them to this repeatedly (while maintaining a gentle approach) will help to engrave the notion that they should always be tolerant to others handling their food. A similar approach should be taken with their toys, frequently taking possession of a toy when their interest is at a peak, and rewarding their tolerance.

For pets who have already developed possessive behaviours, it is essential to seek consultation from your veterinarian or veterinary behaviourist. Unfortunately, it is common for people to manage possessive aggression by avoiding their pet when they are involved with an item or object they protect. While the behaviour may seem innocent, it is often just a matter of time before someone is seriously injured. Friends, family or visitors in the household may approach a possessive animal not knowing of their aggression, and be bitten or at the very least frightened.

Treatment must first be directed at preventing possible injury. Confining or direct supervision of your dog may be necessary so that they cannot gain access to items that they may pick up and protect. This may necessitate preventing access to certain areas of the home to prevent access to such items. Dogs that protect their treats or toys should have them taken away and access permitted only when alone in the crate or a confinement room. In fact, by giving these items exclusively in your pet’s confinement area your dog may learn to be more comfortable resting and relaxing in this area since it is a place where chew toys are given and where the dog is left alone. Highly valued items (e.g. the ones the dog is most likely to protect) such as rawhide bones should not be given to the dog. Of course if there are items that your dog might steal and then protect, you should keep these out of the dog’s reach by using sealed containers or keeping them behind closed doors or in areas high enough that the dog cannot reach. To prevent stealing and to teach leave, you should keep your dog supervised with a long leash attached to a head collar, so that they can be prevented from wandering off, and immediately interrupted if attempting to raid a garbage can or pick up inappropriate objects. 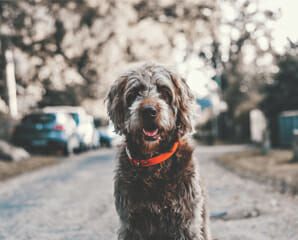 Cases of Leptospirosis in the GTA

Westbridge Veterinary Hospital has received reports of leptospirosis cases from other veterinary hospitals in the GTA.

COVID-19: Additional measures we are taking

We are all aware of the concerns and rapidly changing situation with COVID-19. Due to the close public contact that our work requires, we have taken necessary measures to protect our clients, our staff and work hard to ensure we can continue to provide excellent care for our patients.

The following changes are effective as of Wednesday, March 18, 2020:

2. We are currently operating a "closed-door" policy to protect our clients and staff. When you arrive, please remain in your vehicle and use your cell phone to call us at 905-285-0002. We will take a history by phone, and bring your pet into the clinic for an examination with the veterinarian. We will then return to your vehicle with your pet and you will get another call from the Doctor to discuss our recommended treatment plan.

3. We are continuing to accept appointments for urgent or sick pets, as well as time-sensitive puppy/kitten vaccinations. All other services will be scheduled for a later time.

5. If you are ordering food or medications, please allow 4-6 business days as our suppliers are dealing with increased demand and are trying to fill orders as quickly as possible. We will advise you as soon as your order arrives. Please call us when you arrive to pick up your order, but do not enter the clinic. Our staff will bring your order to your car and take payment from your vehicle.

6. For the time being, we are not accepting cash as payment. Credit cards and debit card payments are still available.

7. Following the recommendations of our government and medical experts, we are doing our best to practice social distancing within the constraints of our jobs. We have taken these measures to avoid both contracting and facilitating the spread of this virus.

Thank you for helping us be diligent for everyone's safety. As we have heard from all levels of government, the situation is fluid, and any updates will be provided as changes occur.